What is the clan name for your area?

This is not as easy to answer as you would think! There are many different language maps showing different boundaries and even different names.

Nowadays, the subject of language groups and clans is the cause for much debate because many different maps can be found and no map can said to be the true one.

For the Sydney region the following language groups can be found on many maps still available today: Darug, Dharawal, Darginung, Guringai and Gundungurra. However, there are various ways of spelling the names and different names can be found referring to the same group. Eora is also commonly used for Sydney. For northern Sydney the term Guringai has been used, however, it was originally invented by a researcher in 1892 for this area and there is a Gringai clan in the Barrington River, Glouchester area who are requesting Sydneysiders to stop using their name. The Aboriginal Heritage Office in its 2015 report, Filling a Void: A Review for the Historical Context for the use of the Word ‘Guringai’ provides the background to the word and some suggestions for moving forward:

It is not authentic to the area, it was coined by a non-Aboriginal person and it gives a misleading impression of the connectivity of some original clan boundaries …  In the absence of a convenient single term for the whole of northern Sydney, the AHO would recommend the use of clan names for local areas, with the understanding that these too have their limitations and problems, and the acceptance of the truth of the lack of certainty as a feature of how Aboriginal history and heritage is portrayed here (AHO, 2015: 41).

Clan names which can be found on most maps for the northern Sydney region of the AHO partner Councils are the following: Gayamaygal, Gamaragal, Garigal, Darramurragal and many more. For Strathfield it is most likely the Wangal. If you are interested in this subject you always have to be critical and try to find out if the sources are reliable for your research. It’s not Aboriginal peoples’ fault that we don’t know these things and it wasn’t the traditional owners’ wish that these things be lost. Hoping that some certainty will emerge now is not really fair for all those people who were told to give up their language, stop practicing ceremony and hide their Aboriginality. If you are doing an Acknowledgement or a document and are not sure what to say, it can be quite effective to acknowledge these facts and to give people an opportunity to reflect on why things are the way they are.

Dr Val Attenbrow provides the clearest review of names and their associated spellings and re-orded or presumed location.

Note, there is no historic use of the term ‘Gai-mariagal’. This term has only appeared relatively recently and as yet no documented evidence has been provided to show it was used at the time of the First Fleet or before the late 1990s. 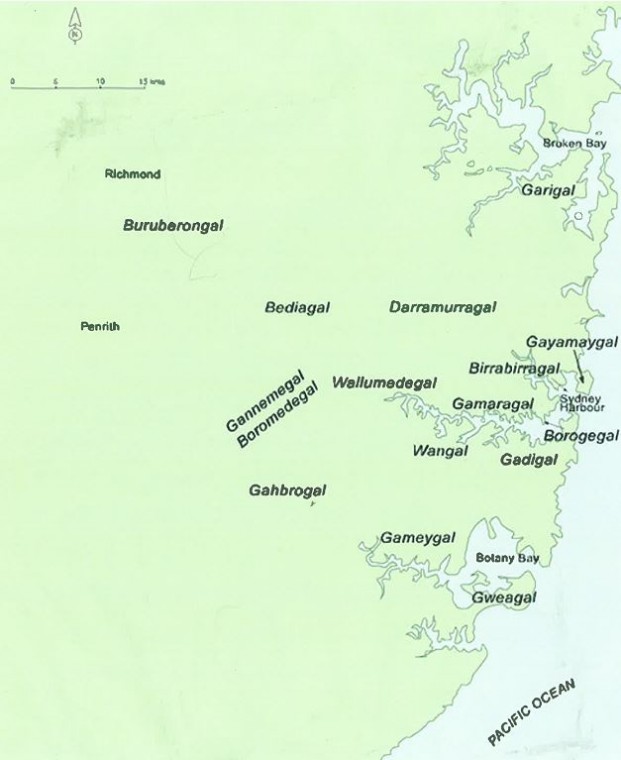 Clans in the Sydney Region
Courtesy of Dr Val Attenbrow 2010