The Sydney Basin is one of the richest provinces in Australia in terms of Aboriginal archaeological sites. There are thousands of Aboriginal sites, of which many contain rock art, and in Sydney’s sandstone belt at least 1500 rock shelters have been discovered to contain cultural deposit. 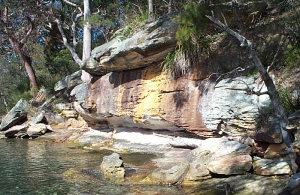 A significant number of sites have been found in the northern  Sydney area and there are likely to be many more that have yet to be identified.  All Aboriginal sites have legal protection under both state and federal law and it is an offence to damage or destroy them without agreement from the NSW State Government. Fines and penalties for harming sites are significant. It is illegal to collect artefacts.

It should be remembered that this heritage is finite, fragile and irreplaceable. A site may be thousands of years old and our generation needs to ensure we do our bit to pass it on to future generations. If you find a site, please enjoy it and the surrounding Country but leave everything in its place and in a similar condition. If you notice recent damage or impacts you should contact the local authority.

Particular locations within a landscape have the strongest likelihood of harbouring sites.  This site potential diagram shows where in a landscape Aboriginal sites are most likely to be found.

Aboriginal occupation sites are places that show that Aboriginal people lived in an area. Stone tools, hearths, food remains including midden materials, plant seeds and bones) are found in a range of sites known collectively as occupation sites.

Aboriginal sites are classified into many different types: 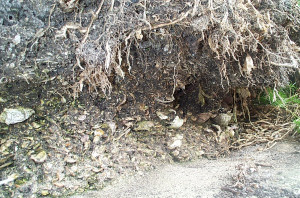 Middens are shell mounds built up over hundreds and often thousands of years as a result of countless meals of shellfish. They are found along ocean coasts, estuaries, rivers and inland lakes, and primarily contain mature specimens of edible shellfish species. They may also contain pieces of clay, bird, fish and animal teeth and bones, campfire charcoal, stone flakes and the remains of tools. Less commonly found in middens are remains from human burials.

Middens differ immensely in shape and size, from a few shells scattered on the surface, to deposits that are metres thick and buried beneath vegetation. Middens are the most common and most visible Aboriginal site along the Australian coast.

Natural shell deposits can be differentiated from middens because they consist of mature and immature, edible and inedible shellfish and would contain no large amounts of charcoal or stone tools. Wave action would also have sifted the shells into layers, with the larger ones at the top and the smaller ones at the bottom.

Shelters with art are clearly defined by either stencil art or charcoal. Stencils are produced by mixing ochre in the mouth into a wet paste, then spraying it over the object to be stencilled onto the wall of the shelter. This method was used throughout Australia, and if the shelter is protected from the elements, then the artwork will still be visible. Other forms of artwork include ochre paintings, as well as charcoal drawings and etchings, although stencil art was the most common method. 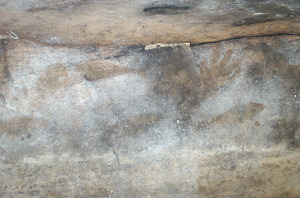 A single artefact depicts an isolated find. These can be verified by identifying the stone and sourcing its origin, or verifying the 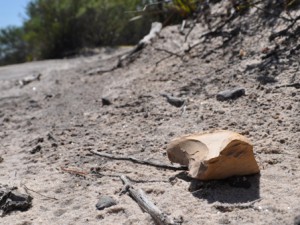 manufacturing scars on the artefact. The isolated find can be a flaked stone, core or any finished implement. Raw materials most commonly used are chert, silcrete, and mudstones, while larger axe heads are usually made from river rocks or iron stone materials. Although isolated finds are generally artefacts found on their own, they often imply other artefacts will be present in associated deposit nearby. 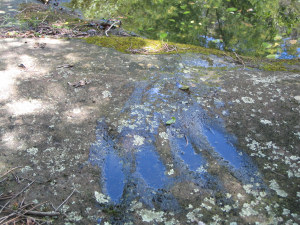 These are grooves resulting from the production or sharpening and maintenance of an edge ground tool.
These sites are generally located near creeks or rock pools. There are a number of grinding grooves located throughout the general Sydney area.

Bora grounds are Aboriginal ceremonial places. These are where initiation ceremonies are performed and are often meeting places as well. A bora ground most commonly consists of two circles marked by raised earth banks, and connected by a pathway. One of the rings would have been for everyone — uninitiated men, women and children. The second ring would have been for initiated men and the young men about to be initiated. Occasionally, one ring can be found that would have been used for corroborees and for the rare fight.

Bora grounds are a reminder of the spiritual beliefs and ceremonial life of the Aboriginal people. They are most at risk from natural processes. The circles flatten over time and become overgrown with vegetation similar to the surrounding area. However, because the soil has been compacted, there will be slight changes in the vegetation, and these differences can often be detected from an aerial view.

Aboriginal people feel equally as respectful about prehistoric burials as modern cemeteries. As Aboriginal people have lived in Australia for well over 50 000 years burials are seen as part of a continuing culture and tradition as well as offering valuable archaeological information. The dead were sometimes cremated, sometimes placed in trees or rock ledges and sometimes buried. Burials exist throughout New South Wales and can be accidentally uncovered in construction work or become exposed through erosion. It is important that if a skeleton is found it be reported to the police, to a representative of the National Parks and Wildlife Service and to the Local Aboriginal Land Council.

Burials are found where soft soils are located. Burials can be found throughout the Sydney area, and a number have been found over the past years in middens and within shelters. Traditional burial practices for the Sydney clans are unclear, however, it is known that traditional practices gave way when disease from the European invasion ravaged the groups throughout Sydney. Burials are an important part of Aboriginal culture, and contemporary practice is to recover what remains have been excavated and rebury them in a secure place at the location of origin. This practice is the consensus of the Metropolitan Local Aboriginal Land Council. 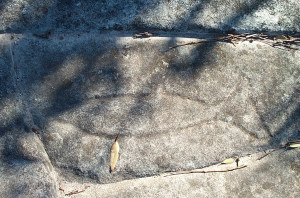 Around Sydney, there are probably more than 2000 engraving sites, only half of which have been accurately recorded (Stanbury & Clegg, 1990). Rock engravings are usually located on highly elevated, smooth, flat surfaces, but in some instances can be found on large vertical rocks. They were made by drilling a series of holes in turn which were then connected to form a line. In the local area, designs include fish, animals, humans, wooden artefacts, and mythological beings.

The precise meanings behind the engravings are not known. Interpretations of what the engravings meant to their makers are sketchy, but the most accepted understanding is that they are products of sacred ceremonies, which were periodically re-engraved as part of ongoing rituals. Because there are no initiated descendants of the people who made the engravings, no one is able to re-engrave them in a culturally appropriate way. They are therefore eroding away from natural causes, human foot traffic, and the ever-increasing use of remnant bushland.

Engravings occur usually where there is a suitable exposure of fairly flat, soft rock or in rock overhangs. People, animal shapes and tracks are common as well as non-figurative designs such as circles. 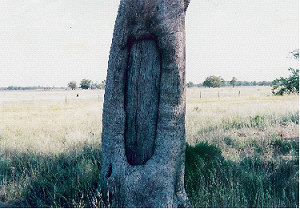 Scarred trees sites are evidence of bark and wood being removed for shields, shelters, coolamons and canoes. These are rare in the Sydney area. The trees can be divided into three groups:

The tree was not killed by these methods and therefore scarring is evident.

Carved trees have complex patterns cut into the tree, where a piece of bark is removed and the underlying wood is carved. When a carved tree is found next to a grave, it is usually a sign of family ties or the totem of the deceased person.

The designs are often intricate spirals, diamonds and circles, and were carved using a stone hatchet or, more recently, a steel axe. Carved trees are important because of the ceremonial meaning to Aboriginal people. They are probably the most naturally threatened site because of bush fires, environmental deterioration, and tree regrowth. They are also at risk from clearing. There are no carved trees surviving in the Sydney area.

A stone quarry is a site in which Aboriginal people collected suitable types of stone for the manufacturing of tools, ceremonial and sacred items. Some types of stone taken from quarries include silcrete, chert and some fine volcanics. Most of the fine stone flakes and tools found in the local area would have been traded in from other areas such as the north coast, Hunter Valley, and the Nepean River.

An ochre quarry is a place Aboriginal people gathered the materials used for painting. Ochre was used for a wide range of purposes, such as ceremonial body decoration, and paint for art works and stencilling. Different colours were used for different purposes. In the local area, red and white ochres are common within rock shelters. 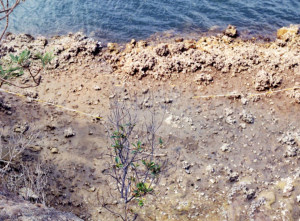 Fish traps are rocks placed side by side to form a circle in water. Traps found in any single area can number from one up to a dozen. When the tide is high, fish swim into these pools, but are trapped when the tide lowers.
Aboriginal people would then came along and remove the caught fish. Fish traps are found on the Australian coast in tidal areas, as well as along inland creeks and rivers.

Stone arrangements are areas where stones are placed in a certain way to form circles, semi-circles, lines and routes. Smaller stones were used to keep the larger ones in place. The arrangements sometimes identified ceremonial grounds and tribal boundaries, as well as other sorts of ownership boundaries. Stone arrangements are at risk from logging, fire burn-off, rearrangement, and the removal of bush-rock for use in suburban gardens. There are very few stone arrangements left in the Sydney area. Care should always be taken when using stone from any bush area, since apart from being sacred to all Aboriginal people, stone arrangements often form homes to wildlife. 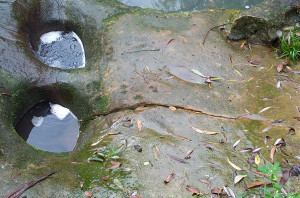 Water holes in the local area were used by the local clans for sharpening tools and possibly as a source of fresh drinking water. The natural hollows were sometimes enlarged or linked to other holes with carved grooves using axe heads or similar tools.

Seed grinding patches are areas of rock worn smooth by Aboriginal women grinding seeds. The women removed the husks, then placed the seeds (eg. acacia, grass, kurrajong and wattle) between a large flat rock and a smaller round rock. The seeds were then ground into flour, which was mixed with water to form a dough. The dough was then kneaded and cooked to make a type of damper, which was an essential part of the Aboriginal diet. Grinding stones / dishes and patches are commonly found in arid areas, but can be found anywhere. Grooves are located on flat rock exposures close to a stream or water hole. They vary in size but are generally long (about 30-40cm in length) and elliptical in shape.

These sites are mostly surface and associated sub-surface scatters of stone artefacts, sometimes with fireplaces. They exist throughout the landscape and are the most common site type in rural areas. While found in all environmental locations larger and denser sites tend to be found on river banks and lower slopes facing water courses, as well as ridgelines and other areas that offer movement routes. The study of open sites can assist in understanding patterns of Aboriginal land uses.