The AHO produces a reasonably regular newsletter, ‘Yarnupings’,  for AHO volunteers and supporters

News, articles and opinion about the wonderful and strange world we live in. 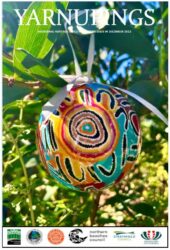 We were excited for you to meet our newest AHO team member, Kyle Nettleton. This issue provides thoughts and reflections of the AHO staff about the importance of Aboriginal cultural heritage, in history, in development and in appreciating this extra ordinary land and its people. Karen highlights catch-up summer viewing for you and delicious recipes for you to try.

Please enjoy the final edition of Yarnupings for 2022. 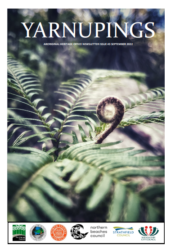 This issue we look at the career of Aboriginal Heritage Office founder, David Watts. ‘How do you measure a ripple?’ looks at the positive flow on effects of the work of the AHO throughout the years.

We delve into the urban threats to the Powerful Owl and how we can play an active role in their protection. We also recount how the AHO team was privileged to be involved in the excavation of Aboriginal ancestral remains at Little Manly Beach. It’s wildflower season , so this issue is full of pretty pictures from around the Partner Council LGAs and our very own Bush Tucker Garden. We even created our own delicious recipe from our garden for you to try. Please enjoy the third edition of Yarnupings for 2022. 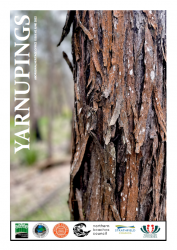 This issue highlights and celebrates Reconciliation Week and NAIDOC Week. It’s been a big couple of months. Mabo Day celebrated its 30th anniversary, Reconciliation Day inspired us to ‘Be Brave, Make Change’ and founder of the AHO, David Watts has retired (Whaaaaat!!! See page 4 for details…)

Please enjoy the second issue of Yarnupings for 2022

We’re so excited to be back in the swing of things. 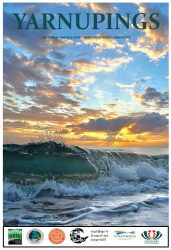 Phil muses over being Lost & Disconnected, what it means and asks how have we become so disconnected. Karen writes about Summer, the different seasons and the fish that run at different times of the year. She has also compiled a list of summer words in language. Phil has been monitoring sites in the Ku-ring-gai LGA and writes about doing so during a La Niña summer. We meet a new volunteer and give thanks to a retiring one. For kids, there is a book review of ‘Somebody’s Land’ by Adam Goodes and Ellie Laing, the D’harawal Calendar to  print out and follow and a damper recipe to try. 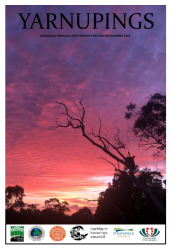 This issue highlights our amazing volunteers who continued monitoring sites throughout this challenging year.

For those interested in learning more about archaeological sites, we have articles on stratigraphy and whelks.

Phil has been out and about on the Step Track and running into unexpected things.

Karen reflects on the wetlands in our areas. This holiday season could be a good opportunity to explore them.

We also have some Christmas craft to enjoy and some present ideas for those yet to grab a gift. 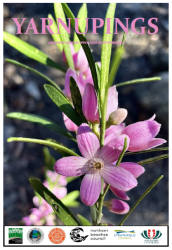 Spring has sprung and we’re celebrating with vibrant images of the amazing wildflowers that are in bloom.

This issue celebrates our volunteers and the valuable work they do and provides some tips for taking photos of an Aboriginal site.

Phil discusses the ethics of revealing site locations and asks the question—who really owns the past?

We have  some Sydney Language to learn and a mask to colour in for the kids (big kids too!) and Karen has shared her delicious banana bread recipe for you to make and enjoy at home. 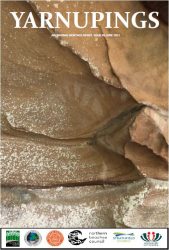 Please enjoy the latest edition of Yarnupings. This issue celebrates Reconciliation Week. Phil talks us through the process of graffiti removal and we showcase some beautiful rock art. Enjoy!

Get your copy of the latest AHO Newsletter, Yarnupings Issue 2 2021.

Finished this edition? There are plenty more Yarnupings newsletters in our Resources section! 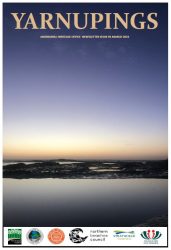 This issue celebrates the AHO turning 21 – From Little Things, Big Things Grow. There’s many a story to share! We introduce you to a new volunteer and rejoice in saying thanks to our many enthusiastic and dedicated volunteer team. Phil takes us through monitoring sites in Lane Cove and we farewell Samaka. There’s Deep Time Dreaming book review and a delicious recipe to try. Enjoy our bumper birthday edition! 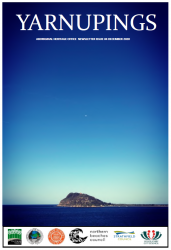 This issue highlights two of our fabulous volunteers. Karen shares her thoughts on her year and Phil writes about the slow creeping damage that occurs to many Aboriginal sites. We have a great review of Archie Roach’s memoir ‘Tell Me Why’ (which would make a great gift idea!).

The staff at the AHO wish you all a very Merry Christmas and Happy New Year! 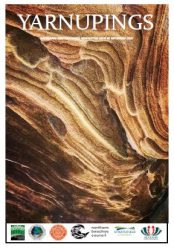 This issue focuses on the theme of food. There may have been an extra kilo or two sneak up on us during Covid time, so we thought we’d take a look at food from Aboriginal Australia.We write about the amazing Saltwater Women of Sydney, look at some tools used in the collection of food, ponder the way we view food and what to do if you’re out in the field and are recording food found in the archaeological record. 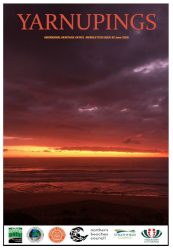 This edition looks at cultural burning, volunteer of the month, AHO museum guided tours, the Schools Dig Program, 20 years of the AHO, Year of the Plant and more. November we look at the Coastal Erosion Project, the real Gringai country, a visit to Noongah Country, 360 photography tours, whispers from the museum, a different perspective on Uluru, a walk in Willoughby Council and more. A new museum exhibit, the Brewarrina Fish Traps, NAIDOC Week, David Unaipon, rainy day ideas, track of the month and unraveling mysteries of old site cards are some of the items in this edition. This is our 19th birthday issue! We look at the AHO in perspective, the mapping massacres website, track of the month and more.

We welcome in the new year and have a look at our new home, Freshwater… 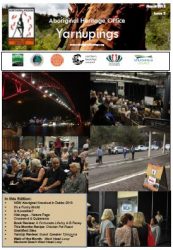 Shell fish hooks, new finds in Strathfield, how Aboriginal people could be discriminated on being too Aboriginal or not Aboriginal enough, the Koori Knockout, and more.

Summer. We welcome Ed to the team, a visit to Broome, the ingenuity of humans past and present, a lighter side of a day in the life of the AHO, the NSW heritage reforms, crossword and quiz and the usual.

A look at mapping sites, the AHO volunteer program, the 1967 referendum, in intern’s insights and a collection of fun activities.

Yarnupings Issue 3 December
Strathfield Council joins the AHO partnership, a summary of what the AHO is, an example of why we do what we do, a look at a continental myth, some Indigenous commentators and media, book reviews, Christmas stories, quizzes and more.

A brief history of legislation affecting Aboriginal people, how to get less lost in the bush, education round up, book reviews, quizzes and more. Tips for AHO volunteer monitors, what is a local, the seasons, questions from students in Denmark and quizzes galore. We farewell Gareth our vols coordinator and general rouse-about, a look at outer and inner heritage from the perspective of the Nepal earthquakes, and a wrap on this year’s Festival.

A colourful wrap of the year’s activities, including the coastal erosion project.

A look at the idea of an unchanging land, fact or fiction, a visit to the World Parks Congress, and to Berry Island.

Nearly 15 years of the AHO, bush foods, who was Bennelong, hello from some interns and track of the month. 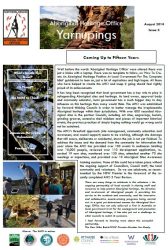 A history of site recording in NSW, cookin’ up a storm, track of the month

Yarnupings Issue 2 June 2014
Mabo Day, possum cloaks, a visit from the NSW Judicial Commission, the AHO moves to Manly, track of the month and more

Yarnupings Issue 1 March 2014
Day of Mourning and Protest, a debate about re-grooving rock engravings, reflections from our Education Officer, shells in a midden, track of the month and more

Yarnupings Issue 6 November 2013
An award for the volunteer program, a yarn up, an exotic take on Native Title, the Tranby family, in fear of the field, movie review and more

Yarnupings Issue 5 October 2013
Someone finds an interesting bone, life in the defence forces, introducing the interns, quizzes, recipes and more

Yarnupings Issue 3 August 2013
The past repeating, Festival feedback, a loot at W.D. Campbell recorder of rock engravings, intern insights, winners of our design comp and more

Yarnupings Issue 8 November 2012
Why not to get kidney stones, discrimination and projection, insights into Aboriginal life, Gulgadya Muru and Manly Dam, track of the month and more

Yarnupings Issue 5 August 2012
Vandalism, a look at anthropology, Geoff’s work in the field, and more Yarnupings Issue 4 July 2013
Archaeology and prejudice, a welcome to Jimmy, insights from the interns, Aboriginal canoes and more 10 year anniversary, heritage rangers around the world, inside the AHO museum, our volunteer program and more